Hello and a very HaPpY cHriStMaS!!!!

This is a short post but one that may just solve your absolute last minute Christmas present dilemma!!! Oh yeh, read on…..

Thank you to the lovely Tilly Walnes, tillyandthebuttons.com @tillybuttons for giving us this•*•*•free pattern•*•*• for her easy peasy fake (fur) collar…. 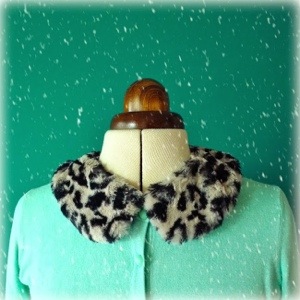 And here is my version…. 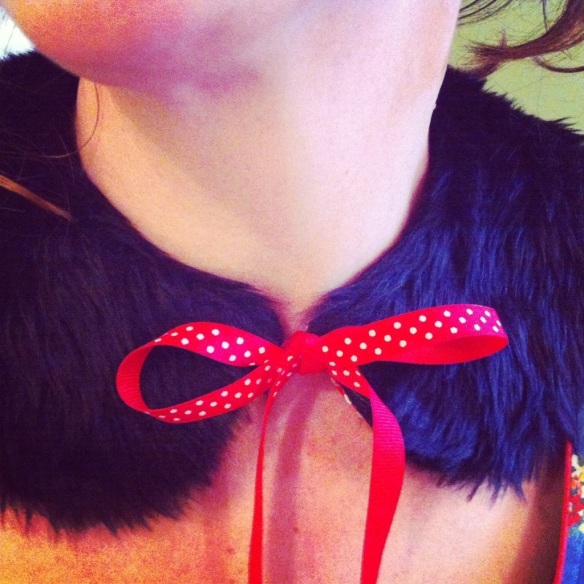 This was for my lovely friend Sarah…and she loved it!!!!

Here she is wearing it…. 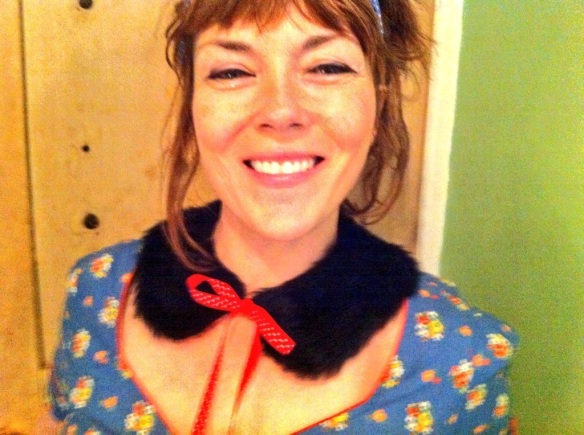 I didn’t go with the slinky lining and instead used some left over red cotton gingham from my stash as my friend loves the stuff! The pattern uses a hook and eye to close it but I went with some gorgeous polka dot red ribbon! Very Christmassy! 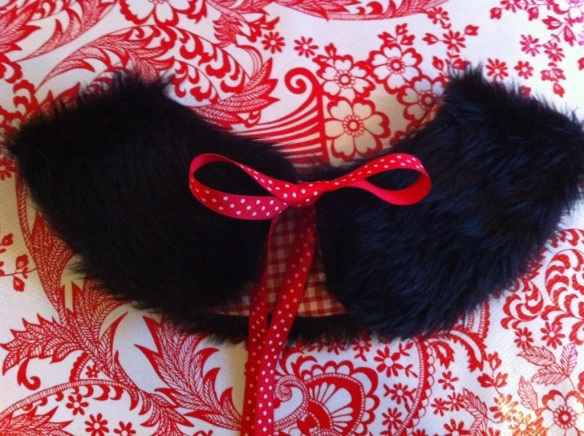 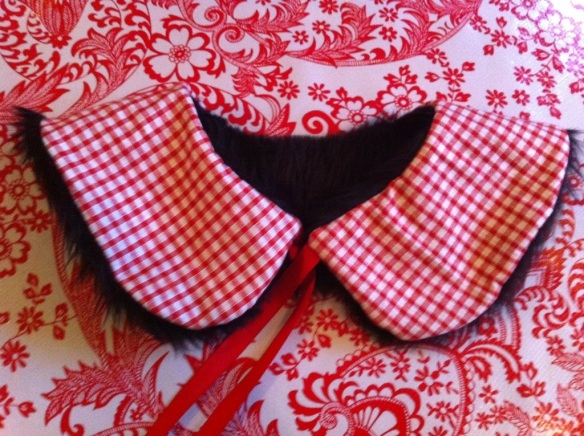 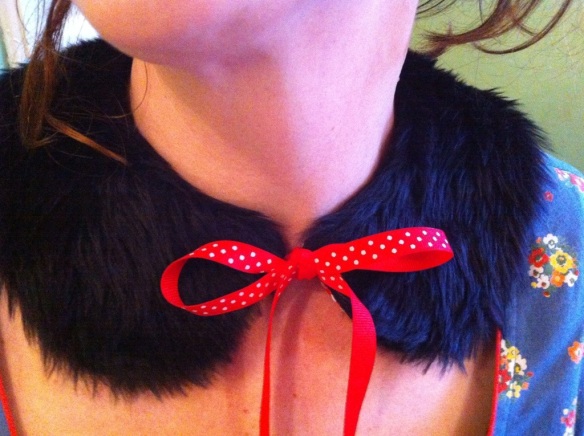 This was a super easy pattern to follow with Tilly’s fab picture tutorial to follow…warning: there’s a whole lotta fluff!!
So if you’re looking for a last minute present to make, give it a go!!

I’ve been pootling around today, making the most of some well earned time off work…time to recharge those batteries and focus on some other things for a change…after a huge (and I mean huge) amount of time spent de cluttering ‘The Back Room’ aka the pit; sorting through children’s toys and more toys oh and toys with bits missing or broken, that have long been outgrown…it was a bit terrifying to be honest because it started from looking quite bad (actually very bad) and at one point I had actually become trapped in the pit, surrounded by bags for recycling, bags for rubbish, bags for charity, bags for friends’ children (yep, that’s what you do…pass your ‘stuff’ onto some other poor unsuspecting parent!) Anyway, after eventually contorting my body in order to escape the pit, and some 4 hours later (bearing in mind I’d done 2 hours plus yesterday), I made it out of what shall now be called, A Clean and Organised Room, to a half hour of crochet time and a well earned cuppa…. Remember I mentioned the new yarn I had started using yesterday on my ‘Soon to be Revealed Little Crochet Project?’  well, here’s the start of it……… 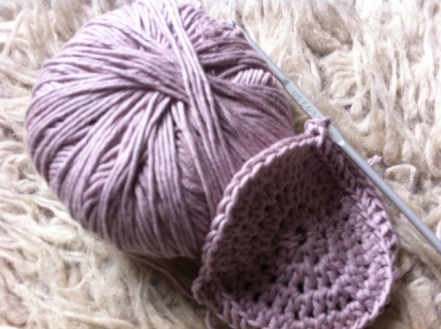 It’s a bit difficult to describe the colour as it doesn’t look quite the same in the picture but it’s a very pale lavender/pink from Debbie Bliss in an organic eco cotton… it’s quite ‘strandy’ as in the yarn tends to separate quite easily when using it if you’re not careful, but I do love the colour and you can just see the beginning of what I’m working on…any ideas what it might be?? All will be revealed, and it is only small, I do warn you, but I plan to embellish it…stay tuned! 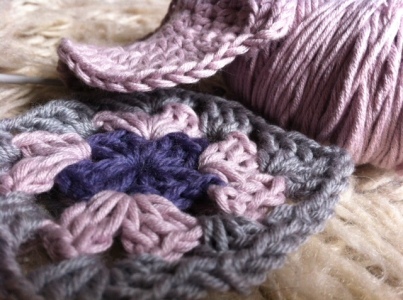 This is the same yarn with a little granny square I’ve been playing around with some colour combinations…..

There’s a heather in the centre, then the lavender and then a very pretty soft grey…I don’t know about you but I really love experimenting with different colours and it’s really refreshing to use less primary colours or brights sometimes…and I’m beginning to think that these earthy type colours are the way I’m heading for a bit. I do love bright colours but we are blessed now with so many more greys, heathers, greens, browns and blues (to name a few) that I feel it only fair to give them a chance in my projects.

I recently bought myself some humungus (not sure if that’s the right spelling!) storage bags…well two, but I’ve currently misplaced one of them! However, I’d forgotten where I’d put them and have at least found one! And here it is….. 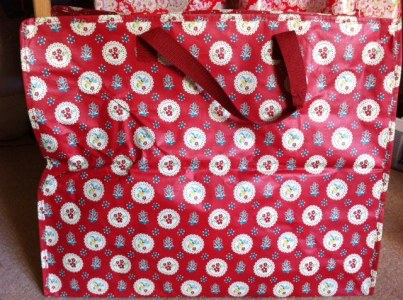 Now, this mumma is BIG…I have a multitude of uses I could use it for but guess what it’s current role is? Yep, fabric stash! well, at least it looks pretty, even if you could actually fit a small child in it! best part is not only is is pretty to look at AND very useful, it is also made of 90% recycled plastic..yay! big tick! Have a look at the print close up…you’ll want to buy one, or two… 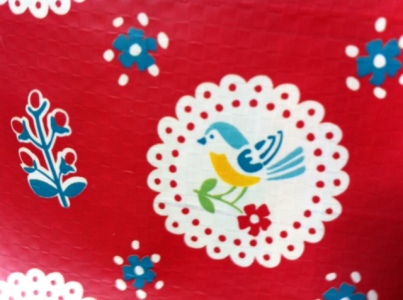 Told you! it’s very pretty isn’t it ? i love the little bird and I have one in a duck egg blue with same print….all I have to do is find it!!

Finally, before I sign off…you might have wondered who Myrtle is?? well, this is she……. **there now follows rather a large gap that I can’t appear to correct** 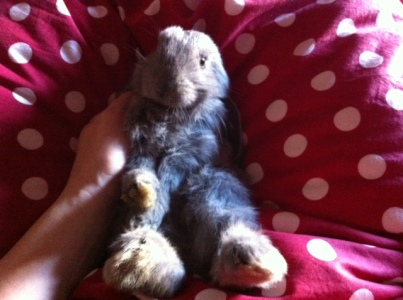 and yes…she is real! This is our (well, my), new addition to our rabbit kingdom…a baby French lop who is the palest of grey (told you I was very keen on these colours), with grey eyes….she has the biggest feet, ears that appear to have a life of their own at the moment and the longest eyelashes I have ever seen on a rabbit! If rabbits can be pretty then she is most definitely working her beauty. Yes, she is lying on my bed in the photo…but I had no choice in the matter as The Smallest one brought her upstairs to greet me first thing! 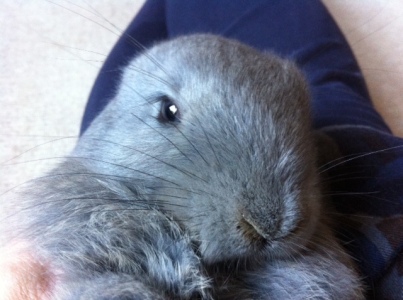 Did I mention the whiskers??!! Sorry, I had to inflict another pic on you all….!!

Whilst this blog is generally about sewing, crochet, crafting, these little furries are quite a significant part of that, as they’re usually trouncing around my feet, jumping on the sofa or on my lap whilst I’m making whatever it is I’m making…that and they (she) is just one of them and they do look quite sweet (apologies if you are not a rabbit lover!)

Time to go and get on with my project….. I also have been asked by a dear friend if I can come up with a camera case (in the style of my ipad cover) for her…a challenge I have happily taken on…..and look forward to sharing here when it’s done.

Enjoy your evening whatever you’re doing!

So, it has finally happened….my first blog post! I have to admit that this has taken an unbelievably long time to set up and work out…I think my skills are best suited to sewing and crafting rather than IT! The name of my blog? well…that’s because you won’t be surprised to hear, I have a rather great love of all things with polka dots! You may find that over the next few weeks, the style or settings of this blog may change as I get to grips with it so please bear with me! 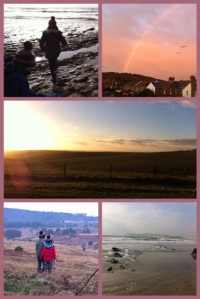 The children, particularly the youngest two, are often asking me to make them ‘a little something’….this usually means something that they can add to their ever increasing collection of soft toys at the end of their beds….the best ones make it pillow end! their most recent additions were the wonderfully soft ‘Easter bunnies’ that I ended up making and stuffing two of  on a ferry to France over the Easter holidays! **Note: they do not have eyes because the children asked for them not to…would make them more cuddly!** I’ll come back to the bunnies another time, when I’ve worked out where the picture has gone!! (told you I’m a bit pants at this!)

I recently decided I wanted to have a go at making a pair of my own knickers….I searched on the internet and whilst I found lots of beautiful knickers to buy from places like Etsy and Folksy I had trouble finding a pattern and one I liked. Eventually I stumbled upon the wonderful  trixielixiesblog.com  They sell all kinds of fantastic things, haberdashery, fabrics, sewing patterns…you name it, but they also sell knicker kits which comprise of a multi size knicker pattern, a fat quarter of fabric, knicker elastic and instructions! Or you can just buy the knicker pattern. So I bought the kit and after a bit of practice sewing on the elastic (which I have NEVER done before) and watching their extremely helpful video tutorial…this is what the end result was…and I am so pleased with them, and rather proud of myself!!  I even posted trixie a photo of my finished knickers, and here is where they ended up…..www.trixielixie.co.uk  and guess what?? I won a prize of another fat quarter of fabric to make another pair!! My dear friend Jen, also bought a kit and whisked some up too!!

This is the front of the knickers……. 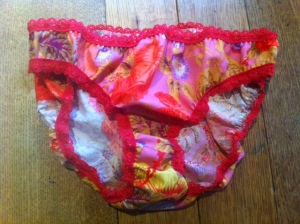 Then we have the back of the knickers…..I added a cheeky little bow just to make them a little more individual and I think they look quite cute…… 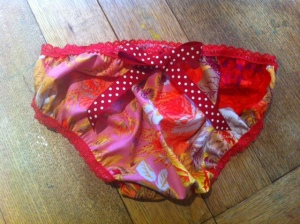 And finally, I must give thanks to my lovely new sewing machine, that helped me put them together….this shows me sewing on the knicker elastic, which once I got the hang of was surprisingly easy, and so satisfying to ‘let go’ and see the fabric all ruched up! 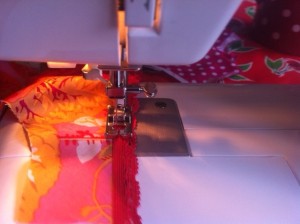 Adventures of a needle and thread

The dream is to sew my own wardrobe with some knitting, crochet and crafting thrown in...I may be 85 before I get there but I figure you're never too old to start something new!

Adventures into the great unsewn.

Adventures of a new sewing apprentice

sewing and knitting a handmade wardrobe

A Bouquet of Buttons
Behind the Hedgerow
ooobop

she sews by the seashore...

My world of craft. A tangled mess of knitting, stitching, sewing and more.

The latest news on WordPress.com and the WordPress community.

This is my blessed life. Family. Sewing. Travel. A simple blog by a sewing convert.